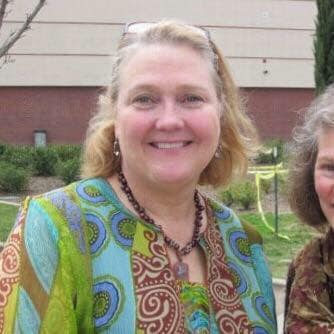 CAROLYN ELDER
Carolyn taught theatre in Sacramento and Elk Grove for the past 30+ years (Samuel Jackman Middle School), and served on the board of directors of California Educational Theatre Association (CETA) for 24 years. She worked on the State of California’s writing committees for the California Visual and Performing Arts Framework and California State Standards.  In 2008, the American Association for Educational Theatre (AATE) awarded her the Lin Wright Award for "most improving theatre education for students kindergarten through twelfth grade in the United States.” Carolyn also designed costumes for theatre productions throughout the Sacramento region since 1972. Costumes Enough, her costuming company specializing in pioneer clothing, provided thousands of costumes for students attending historical events in northern California. Carolyn held a B.A. in Theatre Arts, and an M.A. with an emphasis in Theatre Arts Education.  She was a Fellow of the California Arts Project, and studied theatre at Shakespeare’s Globe in London.

CETA fondly remembers Carolyn as both its Past-President and as a passionate arts advocate. She did much to advance theatre education in our state, especially in her dedication to middle school students. She founded CETA's Middle School Festival, and served as its host for many years.  Several years ago, Carolyn generously endowed a CETA scholarship for students interested in costume design. Her gregarious spirit, generous laughter and loyal friendship will be greatly missed.

For those who would like to honor her memory and contribute to the Carolyn Elder Scholarship in Theatrical Costume Design, please contact Carol Hovey at CHovey@cetaweb.org

HISTORY & OVERVIEW
CETA holds a very special Awards Banquet that honors & recognizes people & organizations who have contributed not only to the CETA organization, but to theatre education in general. This wonderful event takes place during our Annual Conference when CETA members come together for pedagogy, advocacy and our desire to further our understanding of what it means to be both an artist and teacher.

The Awards were initiated in 1981 under the Presidency of Jackie Melvin. Over the years such luminaries as Charlotte Kay Motter, Lawrence and Lee, Carmen Zapata, The Old Globe, Luis Valdez, Cyril Magnin, and the Honorable Jack Scott have been recipients. For your interest, the History of the Awards is below.

Outstanding Contribution to Educational Theatre Award
Recognizes outstanding contributions to theatre education by an individual or organization outside the discipline.

Professional Artist Award
Presented to a professional artist or organization for assistance to and support of theatre education.

Multicultural Award
Honors an individual, organization, institution or company making significant contribution to the field of theatre / drama for education dealing with multicultural issues and / or reaching diverse audiences and constituencies.

New Teacher Award
Honors a teacher that has made a significant impact in less than 5 years in the field of theatre education.

Theatre Leadership Award
Recognize contribution to a specific event, workshop, authorship, or chairmanship of an event or committee.

Administrator Award
Honors an administrator who has played a significant role in the advancement of theatre education.